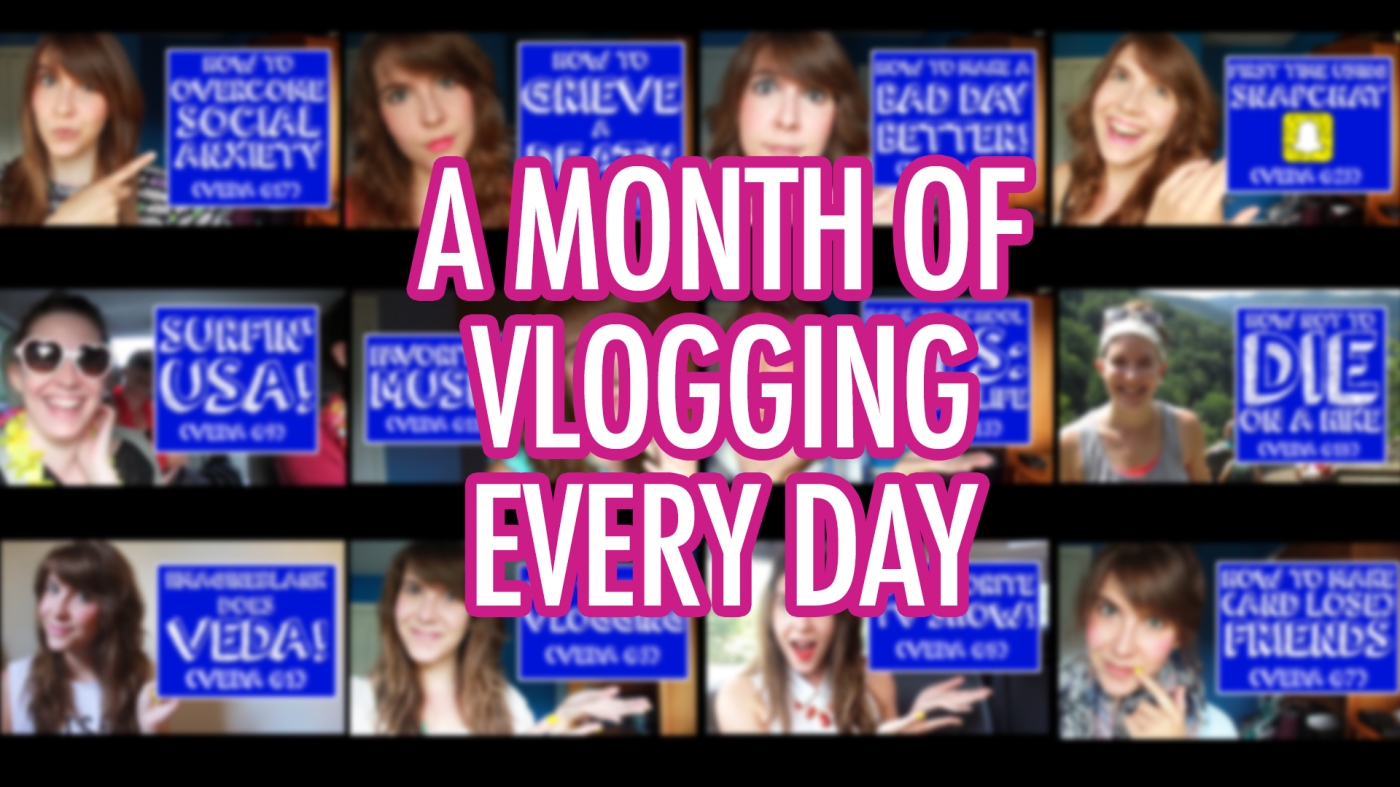 Have you ever tried doing something every day for a month? Were you successful? If you’re anything like me, you probably have started out with a bang and then after 5 to 10 days, your motivation peters out and you find yourself making excuses for “skipping a day” or “making it up tomorrow.” So on August 1st when I began my “VEDA” challenge (or Vlog Every Day in August), I worried that this would be another disastrous video decision that I wouldn’t be able to follow through on.

Thirty-one days is a long commitment. And I’m a busy person. I had been finding it tough to fit in making one video a week for the past few months, so how was I going to manage one video a day?! And what if I had a bad mental health day? How was I supposed to film and edit a happy or silly video? I also had plenty of plans with friends for the month from a road trip to a waterpark with some girlfriends to a three-day weekend in the mountains camping where I wouldn’t have any internet access. How was I going to make all of these varying circumstances work out?

Miraculously, I survived! And I loved nearly every minute of VEDA! I realized I was letting all the “what if’s” and fears get in the way of doing something I thought would be beneficial. It took a fellow YouTuber (The Josh Speaks) challenging and encouraging me to do VEDA for my own good (not necessarily for my viewers) for me to submit to it. In the end, I think it came out a success for both my personal life and my channel’s status. Yes, I ran into roadblocks. Especially towards the end of the month, when some tragic things happening in my hometown area set off a particular low period for my mental health, but I decided that being honest and making a video was better than not making a video at all or hiding my feelings and making a disingenuous video.

Doing something for a month isn’t going to be easy. There are too many variables that can come up and wreck your “flow.” But I can say with pride that this is the first month-long challenge I’ve undertaken that I actually accomplished on time. I worked around my mid-month camping trip by filming a video every day while in the mountains and then editing and uploading them all when I go back to civilization and an Internet connection. On days when I would be spending time away from home, I filmed whatever activity I was doing that day which in turn made me try to find the fun in whatever I was doing. I also found a better recording time for myself for future video-making—the morning is so much better than after work! I have a lot more energy! And my make-up’s usually on point!

Finally, I really felt like I connected with my audience in a way I hadn’t previously. I always ask for questions and love getting feedback from my viewers and I try to answer as many of their questions as I can. But when you’re making one video a week, if someone asks a question and you’ve gotten ahead and already have the next 3 weeks planned out, it makes me feel less influential in their lives because I can’t answer them as quickly. But with VEDA, I was able to receive questions directly from viewers and then answer their question as soon as the next day. I felt like I could do better banter in comments with viewers and really let them know that I do care! That I want to help them! I also felt like I could devote a day to more specific and possibly less popular topics—something I wouldn’t ordinarily do when each video needs to represent an entire week’s worth of views and “iIMAGINEblank content.” But if someone asked a really specific question like to talk about acne solutions or how to grieve a death, why not answer them here? I had 31 days to fill!

At the end of the month and my daily vlogging journey, I am a little sad. My immediate reaction on September 1st was relief. “Oh! I don’t have to wake up extra early to film a video or figure out how to fit in editing time throughout my day!” But not putting out a video, every day anymore does make my content seem less relevant and lose its immediacy. Now, I’m not suggesting I’m going to start daily vlogging! I might just die! But I feel like it’s worthwhile to recognize that while vlogging every day comes with its stressors and problems, it also has its share of positives—like feeling extremely relative and up to date and in the public eye. However, after a few days, I doubt I’ll have any problem reverting to my old ways of weekly vlogging. For now, I’ve just learned a powerful lesson in my own strength and resilience!

Interested in watching my VEDA Journey? Here’s a playlist to get you started!