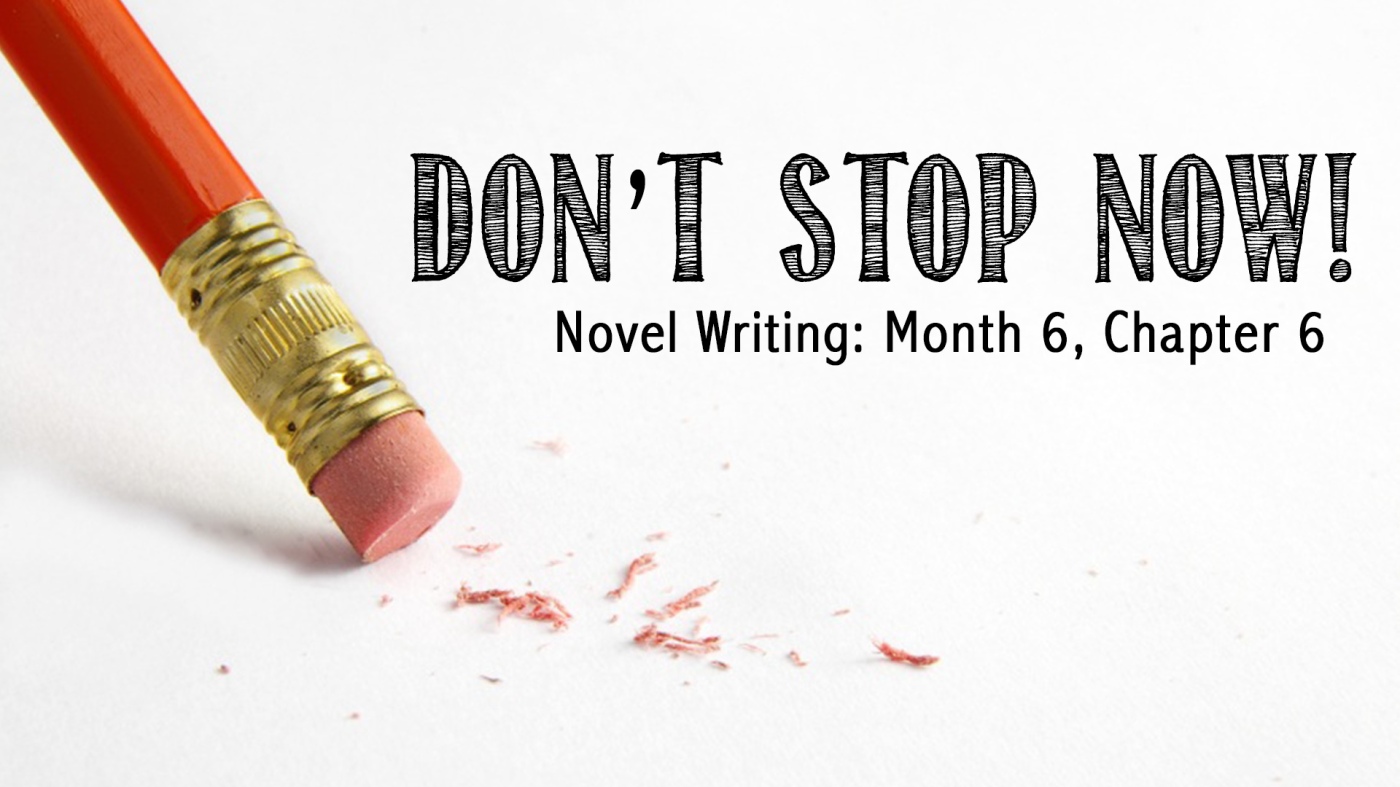 I’m realizing that I have the most typed portion of this book ever at this point, and how do I react to it?  I want to go back and rewrite it all again!  I know I’m supposed to be making a dedicated effort to just WRITE, but it’s so hard when you’re a perfectionist.  I feel like when I can’t remember all the details that it would be easier for me to just go back through and recreate stuff—add in little details I need NOW in previous chapters that I didn’t have enough foresight to create before.  But then there are also probably little details I already included in the story meaning to use them as foreshadowing that I can’t remember now and are left hanging in nothingness and meaninglessness.

I’m going to keep moving forward in the story though.  I had some recent encouragement at VidCon from a friend who had participated in NaNoWriMo twice before in regards to just soldiering through it.  You can’t look back! No turning back at all! It’s like Orpheus!

Since I’m halfway through the year and my goal, I’m starting to feel the strain so I want month 7 to be all about encouraging myself to keep going.  I KNOW I can do it, but that doesn’t make it any less tiring.  So help encourage me as I battle another month of writer’s block and fatigue.  It’s been a wonderful journey so far! And I don’t want it to end!

Also because I was out of town last week, I did a very bad job of promoting my previous blog of which I’m really proud.  If you’re interested in young adult fiction or the misconceptions about mental illness, I highly suggest you take the time to read my latest post: Soul vs. Body: Thoughts on David Levithan’s “Every Day”!

I wrote a thing today because I started the day answering the question of “How are things?” with “Actually, pretty good!” Then spent the mid-afternoon crying.
May journal prompts are up on the blog! Here’s a little timelapse of my process setting up my monthly spread. I went for pinks and greens this time around because May is all about everything coming into bloom, yeah? The left page is my prompt print out (which you can get your own by following the link in my bio 😜) and I use a previous year’s planner page for the right side where I write out some goals for the month along with adding a mini 2021 calendar. Throw on some stickers and cute washi tape and we’re good to go!
I’m so proud of the journal spreads I made for my weekly April photo challenge! I talk about them more in today’s blog (link in the bio!) but I wanted to give you guys a little sneak peek. I loved how they had me actively thinking throughout the week and trying to be creative in both the taking of the photo and how I displayed it in my journal. Also swipe to the end of the series for a never-before-seen close up of Finn the grumpy vampire cat. 🧛🏻‍♂️🐈
I guess since it’s been a week, it might be useful to do a round up of my Pfizer shot #2 side effects! I was so worried about being laid out on Friday because no one wants to spend their birthday sickly and certainly not voluntarily sickly! I got the shot at 2 pm on 4/15. I felt fine the rest of that afternoon/evening. Preemptively took some Tylenol when going to bed but slept well and woke up thinking I felt great! About 5 minutes of laying there I realized I was not actually fine. 😅 Friday I was pretty intensely achey though a Tylenol + ibuprofen combo knocked that out and I felt pretty normal as long as I was taking it every 4 hours. Saturday I woke up feeling fine. I was sleepy all weekend but that’s also somewhat normal. 🥲
Thankful for a sweet start to my 31st year despite it being my 2nd pandemic birthday 🙄 and being achey from my vax! 🥳 But Eric came to visit, built me a new office chair (after using a sad, uncomfortable chair to work from home for over a year now), we enjoyed spring weather in the park where I got to journal, and even got to blow candles out on an Oreo blizzard ice cream cake! 🎂
Celebrating my almost birthday with being fully vaxxed (+2 weeks) but shot #2 is done and here’s hoping that 31 brings a little bit more time outside of my apartment and seeing more friends IRL instead of through a computer screen! 😅
No April fool for you today, just new journal prompts! 📓✍️ I’m excited for this month’s offering because 1.) it’s my BIRTHDAY MONTH 🥳 but 2.) I’m also including a weekly *photo challenge* 📸 to really flex those creative brain muscles. So get to journaling and be on the look out for March’s journal round-up on my stories tomorrow! Link is in the bio for the blog post and this downloadable design.
This is the face of a girl who’s 1 out of 2 shots down from hugging her grandma again! 🥳💉🥳💉🥳💉🥳
You’re probably seeing a lot of “what were you doing when the pandemic/lockdown started” posts this week, but I think it’s important to reflect, especially in a year of such chaos and grief and loss, so I want to add my own little thoughts to the abyss that is the internet.