“Gone Girl” directed by David Fincher and starring Ben Affleck and Rosamund Pike has recently been sweeping the nation as the latest psychological thriller phenomenon at the box office. I haven’t read the book though I did go see and thoroughly enjoy the movie (which admittedly, is not something I normally do as I prefer to have read the book before watching a film adaptation of a novel). In this case though, the trailers got my interest piqued enough that I decided to go with the film buzz and see it opening weekend. It was different than I expected it to be. I assumed it was going to be a cut and dry murder case with some twists and turns figuring out the identity of the real killer. That’s not exactly how that movie worked out, but it was certainly filled with all the twists and turns I could want! What really struck me though is how familiar the plot started to seem. Not in a “this has been way overdone in movies before,” but rather a “why does this strangely unique plot seem familiar when it shouldn’t?”

And that’s thanks to Pretty Little Liars on ABC Family. 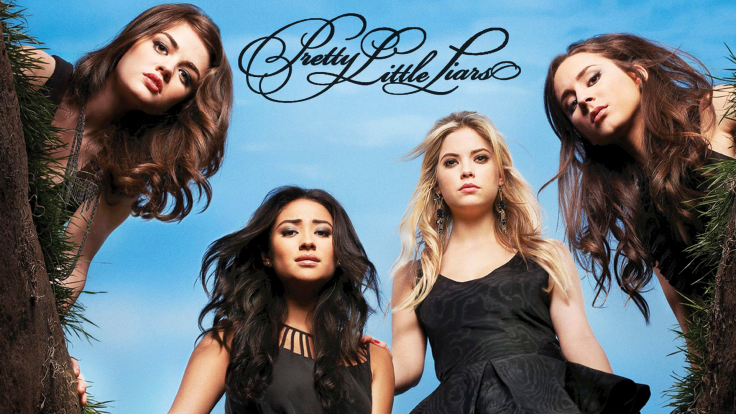 Again, I haven’t read the Sara Shepard book series, but I’ve been fascinated by the television show since it first came on in the summer of 2010. And since I’ve been rather religiously following the show to figure out who “A” is, I know the mythology really well which is when I realized that in watching “Gone Girl” I was actually watching the grown-up version of “Pretty Little Liars.”

Girls with the name “A” like to “disappear” and play games. The “girl” that disappears in “Gone Girl” is named Amy Dunne. The girl that disappears in “Pretty Little Liars” is named Alison DiLaurentis. (Coincidence?) In “Pretty Little Liars” after Alison disappears, her high school friends are terrorized by an all-knowing phantom-like character distinguished as “-A” who sends them texts, notes, and haunting “gifts” that threaten to reveal their deepest secrets. Similarly, Nick Dunne, Amy’s husband is left with an incriminating anniversary scavenger hunt that playfully teases Nick into the realization that he’s being framed for her “murder.” Both of these “A” girls appear to love playing games with their “loved” ones like a cat hunting mice.

Girls with the name “A” have a sick obsession with death. For some reason, death (or rather faked death) is the only answer for these “A” girls’ life problems. Rather than facing their demons and therefore resolving their problems, death seems like a better option. When is death ever a better option? (Short answer: NEVER.) Both girls fake their death after “disappearing.” Both girls murder (or at least are an accomplice in the murder of) another person to help continue their charade.

Girls with the name “A” like to implicate others in their murder. 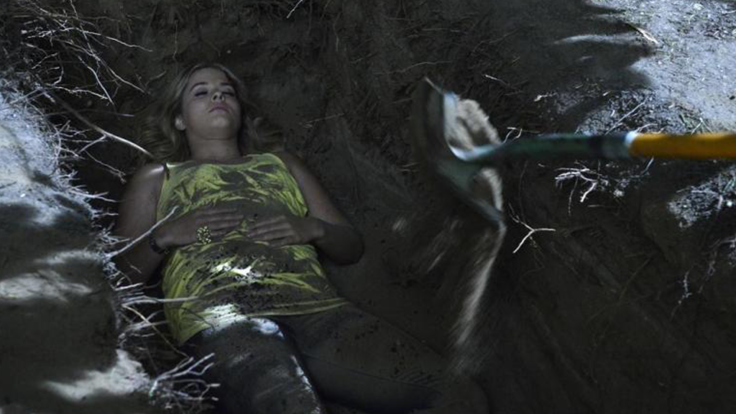 Amy sends Nick on a scavenger hunt for all the “clues” she’s left to frame him for her murder. Alison uses other’s secrets to blackmail them into doing her bidding. They both want other people to suffer for wrongs they feel have been done to them and the obvious means by which to do this is framing people for murder. Obviously.

Girls with the name “A” seem to attract innocent bystanders into their game like moths to a flame. 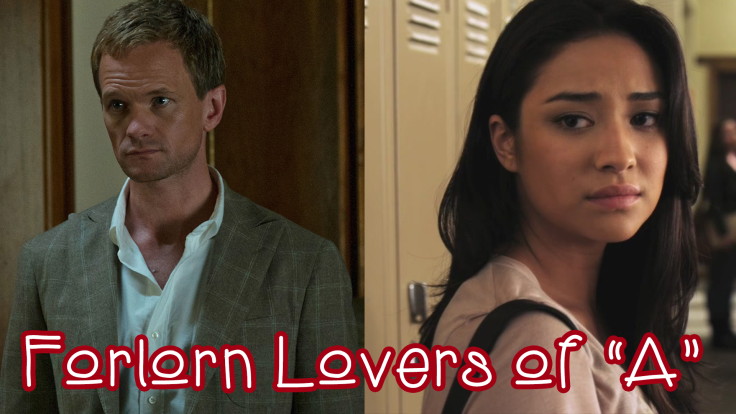 The unfortunate part (for law enforcement) of being an “A” girl is that you might have sociopathic tendencies, but you’re an extremely enticing person. You make people want to be your friend easily. You make them bow down and worship you even if they don’t quite understand why they’re doing it.

This was the case for Amy and her high school “puppy lover”, Desi Collings, who she uses to first, save her financially when she has all her money stolen, and then, as her supposed “kidnapper” because of his strange history of stalking. Similarly, Alison attracts the four girls in Pretty Little Liars—Spencer, Emily, Aria, and Hanna—as well as many other characters in Rosewood, PA to her web of secrets, lies, and deceit so that she can use them to further her charade.

Interestingly, Amy uses Desi in a similar way that Alison has used Emily in the past. Both Desi and Emily are loyal, unrequited lovers who so desperately want the affection of their “A” girl that they will betray their other friends and the police in order to make her happy. Desi’s devotion to Amy ended in a spectacularly gory bloodbath and smearing of his good name so I hope that Emily can wise up before something similar happens to her.

Girls with the name “A” convince you not to go to the police. 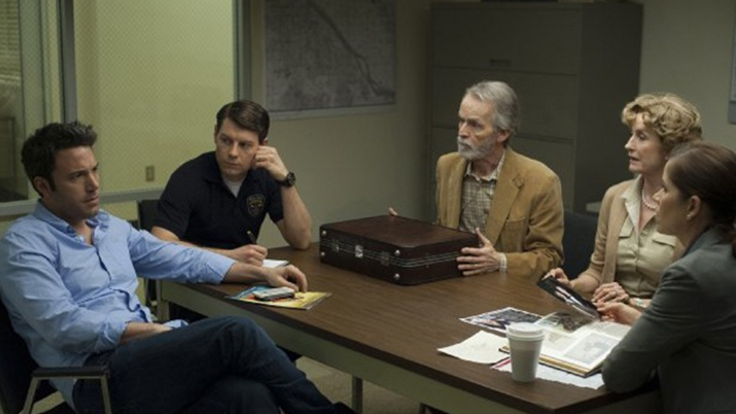 What fascinates me the most about those who are under the thumb of an “A” girl is that they don’t go to the police. Why doesn’t anyone think that telling the WHOLE truth to the police is a good idea? Why is honesty punished by the justice system just because the truth isn’t the most “obvious” answer and is therefore assumed a lie by the justice department? *face palm* It bothers me so much that both “A” girls have such a firm hold on their “playthings” (aka friends and/or husband) that they can even make up nonsensical stories and rather than outing them to the police when they have the chance, they lie for them too! It’s a sick and twisted world they’re living in.

Girls with the name “A” like to start pregnancy rumors. 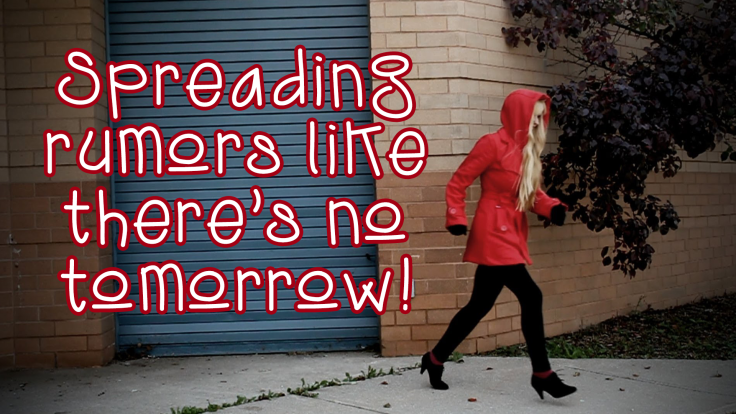 Amy uses a fake pregnancy to make her disappearance seem even more suspicious and cast the shadow of guilt onto her husband Nick who supposedly “didn’t want children.” Whether Alison was ever actually pregnant or not (that is, if she just thought she was pregnant and wasn’t or she made up the entire pregnancy rumor to manipulate people or she was pregnant and got an abortion or had a miscarriage), her supposed “pregnant possibility” again made her disappearance and “murder” seem more plausible especially with her fascination with older men. Both “A” girls use being pregnant as a way to shift blame and scrutiny on others.

Girls with the name “A” like to keep a journal and embellish on their lives. 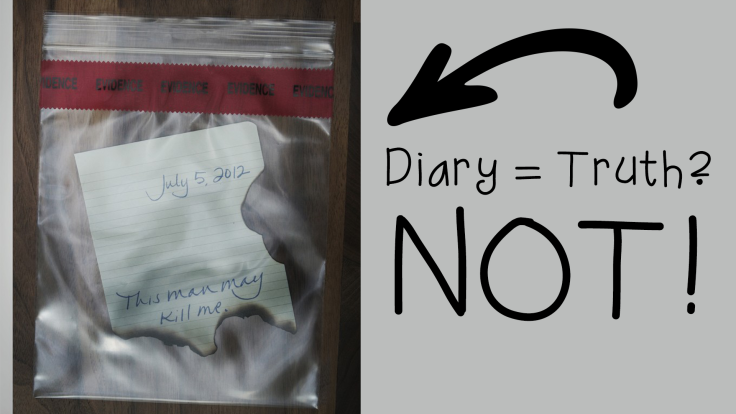 Alison kept a journal about her extravagant escapades and lies that she constructed which is how Spencer, Aria, Hanna, and Emily are eventually able to track her down. Similarly, Amy leaves a journal meant to incriminate her husband filled with some true and some fanaticized stories about her marriage. We tend to want to believe a person’s journal as truth because clearly they’re writing from the heart so it wouldn’t be a lie, right? Not if you’re an “A” girl. No, you write a journal to further the truth you tell yourself even when reality speaks to the opposite. There is a common thread of truth underlying the stories somewhere, but they’re twisted and bent to create an alternate reality for an “A” girl’s life and alibi.

Conclusion: Girls with the name “A” are apparently psychos. My apologies to any girls with a name that starts with “A,” but apparently you’re CRAZY. By the end of “Gone Girl,” I came to the conclusion that I now know the future of “Pretty Little Liars.” Alison DiLaurentis will grow up and change her name to Amy Elliot and move to New York where she will hire an unassuming couple to pose as her parents (because her real ones are dead, because everyone on PLL dies, duh). She’ll then fall in “love” and marry clever, if average Missouri man, Nick Dunne who she’ll eventually get tired of and decide to get back to her old ways of “disappearing” and framing other people for her (fake) murder. Spencer, Aria, Hanna, and Emily won’t be able to warn Nick this time because they’ll all either be in a padded cell in Radley or dead. (Mostly likely from an early onset heart condition caused by too much “A” stress.)

Basically, “Gone Girl” is just the grown-up version of “Pretty Little Liars” with a lot more gore. And the same conclusion can be drawn: these “A” girls are sick and twisted, but they draw people into their webs like a murderous black widow. Also, it never ends well for the one caught in the web. Curled my hair and said “I’m gonna take a selfie in the good light today!” And Finn said “Nah, that’s my spot! 😝”
A first look into my #2022ImagineJournaling with the first prompt of “word of the year.” I’m usually a little skeptical of prompts like this. How can one word capture my intentions for the whole year? How can I really even commit to one word without knowing what the year will hold? I’ve also always thought a word for the year needed to be ACTIVE and inciting RADICAL CHANGE. But when I was going through some words recently for inspiration I came across “NOURISH” and realized nothing better encapsulated what I actually need this year. Not RADICAL CHANGE but RADICAL LOVE. We beat ourselves down so much trying to squash ourselves into submission of the idea of “New Year, New Me!” and that we need whatever change we see on Instagram/Facebook/TikTok/Twitter/etc. We need that life…we need that body…we need that love…to be truly happy! And even when I’ve recognized the inherent lies in this, I still find myself pushing and molding and aching for what I think other people think I should be doing. (Doesn’t that sound exhausting?)
It’s a new year! Which means time for a new journaling challenge! 📓🥳
2021 Photo Dump No.5
2021 Photo Dump No.4
2021 Photo Dump No.3
2021 Photo Dump No.2
2021 Photo Dump No.1
Last video of the year! So let’s look back at my 2021. I had a lot of aspirations for this year, but it’s been HARD. So what did I accomplish? And what did I learn from it? Check it out with the link in my bio!