I don’t really consider myself a Grammar Nazi. I can get pretty distraught over people’s horribly mutilated YouTube comments that clearly show they don’t have a grasp of the English language, but rarely do I freak out over the misuse of “your” and “you’re” or “its” and “it’s” in casual writing. (Although I definitely have met people who do. English majors I’m looking at you!) But I do have certain expectations concerning the appropriate use of grammar when dealing with businesses—especially those who employ the use of language on their products. And recently my goodwill in one of my favorite clothing companies was dashed when I ran into a very obvious mistake.

I was considering buying the comfy-looking black sweatshirt above from Wet Seal. I thought it was cute and snarky, and I liked the simplicity of white on black with the tiny accent of pink. But the more I looked at it (because I typically agonize over new purchases in my shopping cart for days to weeks, depending on how long until a good sale), the more I realized that something seemed off. And then: 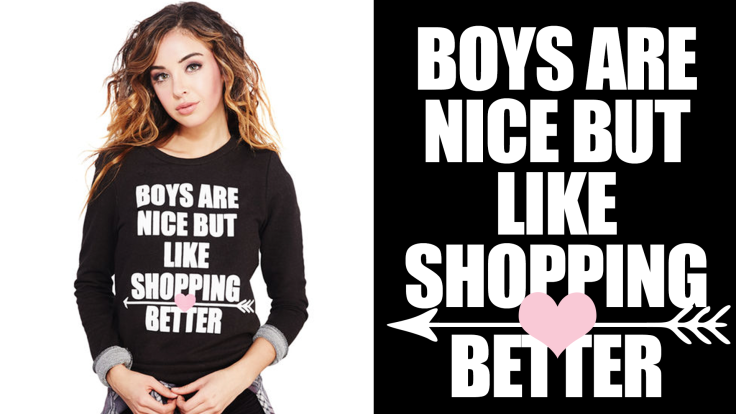 I tried to justify it to myself. Maybe it’s supposed to be read in a valley girl accent. Maybe the “I” is just hiding in the folds of the shirt and the physical version would feature the grammatically correct version.

But no. There’s no explaining this except to say that Wet Seal needs a proofreader for its graphic shirts because really this is unacceptable. How did this shirt go into production, get a photo shoot for the online store, and be uploaded online without ANYONE noticing or holding up a red flag. (“Hey guys, does this shirt make sense to you?”)

I’m really disappointed in Wet Seal. And I’m a little disappointed in myself for nearly purchasing this sweatshirt. I left a comment on the product in hopes of warning some poor soul away from making a grammar faux pas, but also to stick up for women. That seems like a weird assertion to make, but I feel like wearing this sweatshirt makes the statement that not only is shopping is better than boys, but it also ranks higher than appropriate grammar or taking the time to proofread. Who cares as long as you look cute in your new clothes!

This is a real “shaking my head” situation. I’m sure this isn’t the first time a clothing company has put out a grammatically incorrect or misspelled shirt, but when it’s marketed toward teen girls I feel like you’re tricking a young and naïve population into looking dumb and wasting money. That’s not the kind of message I would want to be sending if I was part of Wet Seal’s public relations/marketing team. We girls like boys, shopping, and intelligence. 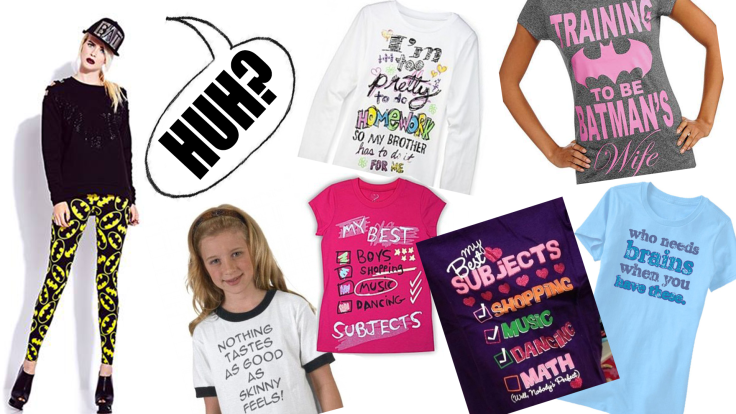