Women’s clothes are weird. If you’re a woman, you probably already know this. If you’re man…well apparently you have an interest in women’s clothes and who am I to judge? Essentially I’m pretty fed up with women’s clothes. Sometimes I fantasize about burning my bra and running naked through the fields with my only covering being my hair braided with flowers. Then I remember I’m not a nymph or living in a fantasy world. It’s not really even in the realm of possibility.

No, I live in the real world. And I have to wear clothes. And I live and work in a pretty traditional setting so I have to wear women’s clothes. I also own quite a lot of women’s clothes. Which brings me to our topic today. Women’s clothes suck. Like yeah, there’s the whole issue of women having a much more complicated world of clothing: dresses versus pants, heels versus flats, do you add a scarf or accessories. But what’s really bothersome about women’s clothes is the way they are made.

Let’s talk about sizing. None of it makes sense. There’s junior’s sizing and women’s sizing. And now there’s junior’s plus sizing and women’s plus sizing. Plus don’t forget about petite sizing! And even tall sizing. So that’s essentially 6 different systems of measurement for women’s clothes. That also corresponds to how pieces in each of those categories are made. If that’s not confusing enough add in the fact that pretty much every brand decides how their sizing system is going to run and it very rarely matches anyone else’s’. 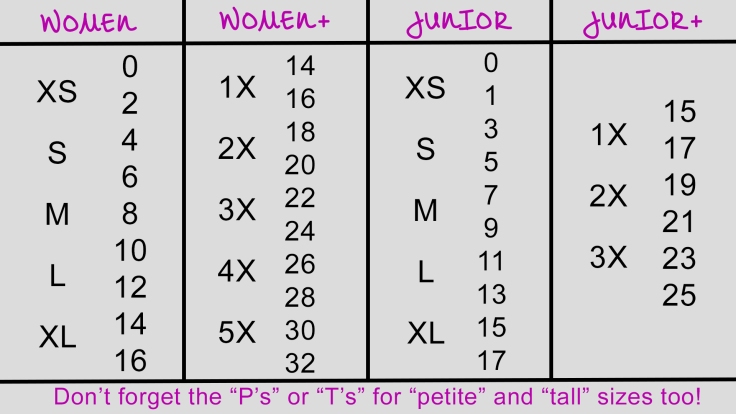 I’ve gotten to the point that I don’t know if I’m weirdly shaped or if it’s just the clothing. For example, I’ll tell you about my own sizing. I typically wear junior’s clothing because that’s what I feel most comfortable in and they tend to have the bright colors that I enjoy at a reasonable price. I’ve been wearing a size 7 in junior’s pants since high school and that still holds true. On most charts a size 7 translates to a medium. But very rarely do I wear anything that’s not a large or extra large in junior’s tops because:

So then I recently started buying junior’s 1X’s in certain tops like sweatshirts (because I like them long and baggy) and t-shirts (because I don’t like midriff bearing or super-tight tops). And then one of three things happens:

So then I look at women’s clothes. Tops usually fit better there, but most of the time I still find that I need a large or extra large to feel comfortable. And dresses in women’s…oh gosh! Who even knows? I wear mediums in this one brand I like Apt. 9 that I’ve found at Kohl’s, but I have to wear a 12 (!) in almost anything Lauren Conrad (also at Kohl’s). Interestingly enough in Lauren Conrad skirts, I’ve bought anything from a 12 (which is like a large or extra large depending on what chart you’re looking at) to a medium. And a small in ELLE skirts but a 10 in ELLE blazers. Don’t even ask me what size pants I wear in women’s sizes. I own 4’s, 6’s, and 8’s and they all have the same kind of fit. Do you see!? It’s like Alice in Wonderland of clothing! Nothing makes sense! It’s all topsy-turvy and upside wrong and right side down!

If a man goes to buy pants and he has a 33 inch waist and a 32 inch inseam, he buys a pair of 33×32 pants. Simple. I mean he has to choose between straight leg or bootcut or pleats or not but that’s essentially it. Women have to think about how much spandex versus cotton content their pants have before choosing a size! Is it low-rise or high-cut?

Now I understand why the standard for women’s sizes is on a shifting scale. I know it’s all about perception and weight and the fashion and model industries. I know that most of our clothes are not made in America and tend to be outsourced to factories where not only are the pay and working conditions horrendous but the quality standards for production just aren’t up to par. (e.g. One time I ordered an extra large dress shift dress from a brand I knew I wore a large in but I wanted to be extra sure it would actually be a “shift” and not an accidental bodycon dress, but I ended up with an obviously mislabeled dress that wouldn’t even fit over my shoulders.) But why can’t there at least be some kind of normalcy involved? Wouldn’t it be nice if I didn’t have to feel like a toddler trying on my doll’s clothing every time I went to the mall?

And I know I’m not alone in this problem. Every dressing room I’ve ever been to in a store has a rack slam full of “not working” clothes outside. I’ve heard the sighs and groans and huffs of frustration when you find something you really like, bring three different sizes but still none of them work. One’s too big. One’s too small. One’s too awkward. Why!? It is an injustice!

Well…maybe not an injustice. But it does feel pretty unfair when the world is already always telling us that we’re not good enough, we’re not pretty enough, and we’re not thin enough. It’s just one more negative tick in our self-esteem depletion box. So how do we stop it? I’m not sure we can really change the fashion industry with force or over one generation, but we can stop the negative thinking. And realize that the weirdness we feel in the dressing room or in front of the mirror at home, is not our own body’s weirdness but the weirdness of women’s clothing. The clothing and the manufacturers and the designers have the problem. They’re not being made for real women who come in all shapes and sizes. We just have to find what is made in our shape and size and forget about the other stuff. Perhaps take up sewing and learn how to tailor our favorite pieces to our own unique size. But never, even let the clothing make us think that we’re the weird ones.