It’s been a few days, and I’ve been able to process the series finale of Pretty Little Liars a little more. If you’re interested in my in-the-moment squeals and gasps, you should check out my latest video here.  But otherwise, I thought I’d lay out some of my in depth thoughts on that crazy A.D. reveal and how the series tied itself up.

First, somewhere around mid season I saw a theory that Spencer had a twin, and I really started to believe it after the scene in the airport with Ezra, Wren, and “Spencer.” When Spencer visits Toby at his cabin and has sex with him, I also felt like this was a pretty disingenuous Spencer moment and it strengthened my belief in the “Twincer” theory. So when it was actually revealed about midway through the finale through that awesome mirror scene that Spencer actually DOES have a twin (aka Alex Drake), I was both gasping with shock (because WHOA!) and internally delighted that for once the subtle clues had actually lead to a plausible “A” reveal. (As opposed to the Charles/CeCe reveal which while somewhat expected because we’d run out of suspects, felt weird and half-thought out.) There didn’t feel like there were actually many clues that CeCe was Charles was A or how she stole the game. (Hence why there needed to be an entire episode of flashbacks and explanation).

So was this ending satisfying? Yes and no.

Yes, because there were actually a few deliberate clues to lead you to this A.D. reveal. But also no, because it feels like a big missed opportunity that got shoved into the last half of the final episode.

One of the initial intrigues of Pretty Little Liars was that it’s such a mystery. A’s identity is always hidden and masked behind manipulated minions. And it became a bit of a trope for the show to not make any kind of “bad guy” reveal until a season finale. While I think this really worked for the reveal of the initial A (aka Mona) because she was so unexpected, but also completely suspicious if you rewatch those first two seasons, it’s become a bit of a detriment to the show’s story in later seasons.

And I think that formula may have finally run itself into the ground in this final season. The major complaint I’ve seen in comments in the run up to and during this season is that people want answers. On a show that’s known for its twists, there have been quite a few plot holes over the years, and I think many diehard fans were hoping for answers in the A.D. reveal that cleared up at least a few of them. But while this season was touted as the “Season of Answers” and a few questions were put to bed (e.g. Who was Charlotte’s father? Who killed Mrs. Dilaurentis?), I think overall we were still left with many unanswered questions and plot holes (e.g. What happened to Nicole? Did Alison ever get her money back? Was the full story of Bethany Young ever fully told? Did Mary Drake actually care for Spencer?)

The “Spencer has an evil twin” reveal was interesting in my opinion, and had a lot of potential to clear up many of those plot holes if it had been more fully formed and introduced earlier in the season. The one regret I really have from this finale is that I wish Spencer being captured and Alex Drake taking over her life had happened earlier in the season. I know that wouldn’t have given us the quintessential last-minute “A” reveal, but I think for the story as a whole it would have been more compelling. We had to learn everything about Alex Drake in the last hour of the show, and I just don’t think it was enough time. (Hence why there are still so many questions and plot holes). I would have loved to see more of Alex impersonating Spencer (with context it makes it incredibly creepy like when she’s holding one of Emily and Alison’s twins). And I think it would have been more compelling to see the girls figure out that Spencer isn’t Spencer organically and not just Jenna noticing a different perfume, and in a move completely out of character, Toby and the girls actually believing her. (Wouldn’t it have been incredible to see Jenna figure it out but no one listened to her and actually seeing her work toward helping someone for once?)

I guess what I really wanted was more time understanding A.D. and for it to connect better with the original storyline of CeCe (and even Mona!) as A. Why couldn’t Alex have been there all along? Why couldn’t CeCe have been protecting her and not wanted her to get involved with the game until it became necessary because Alex wanted revenge on Charlotte’s murderer and the girls for taking her sister away from her for five years?

I know the answer is: no one in the writer’s room really thought that far ahead. And also: non-series regulars have time constraints which contributed to the lack of Wren’s presence this season (all his scenes were shot in one day!) despite his character being central to the A.D. storyline. But sometimes I just want MORE from a show! If you’re going to commit to seven seasons, then really COMMIT! It hurts as a fan to see the show’s hard work thrown away with weird replacement storylines because actors couldn’t show up or the fans were too good and guessed the villain early or you want to drag out the suspense and therefore don’t leave time for the payoff and explanation.

All in all, I think I’m just happy that it’s over. (NO MORE A MYSTERY!) While I love the show, I also recognize that it was pretty ridiculous at times. But I’m glad that I actually stuck with it to see the eventual (and final) reveal! It feels like something I can check off my bucket list. And hey! We’re not old ladies in the retirement home when we finally figured it out! 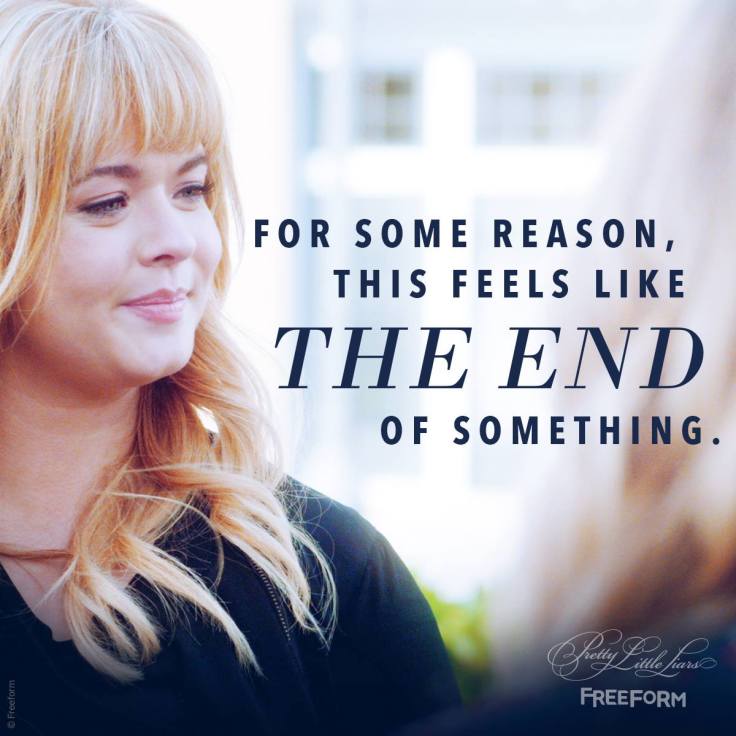 So what do you think about the A.D. reveal and the Pretty Little Liars finale! Let me know in the comments!