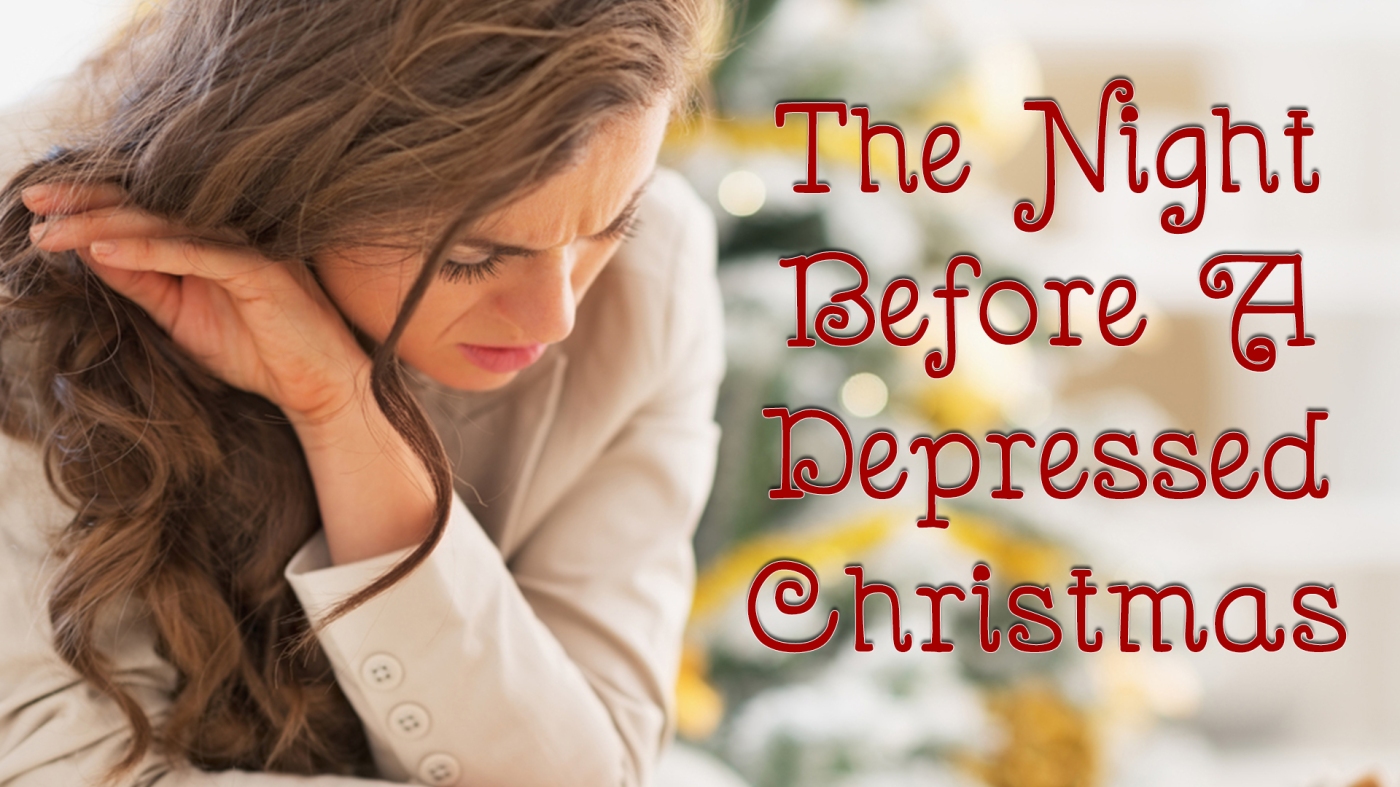 ‘Twas the night before Christmas, when all thro’ my mind
Not an emotion was stirring, not even one kind;
The stockings were hung by the chimney without care,
With little hope that St. Nicholas soon would be there;
I wished to be nestled all snug in my bed,
But visions of disappointments danc’d in my head,
For Christmas isn’t so bright to the depressed population
Rather it causes us quite a bit of undue consternation.
When everyone is jolly and merry and bright,
But we can’t quite seem to get the mood right,
We’re told to “Cheer up!” and get some “Christmas Spirit,”
Though after the fifth time, we don’t want to hear it.
Our friends and family are concerned in our less than jolly appearance
While holiday closings cause a bit of therapy interference.
A visit from St. Nick doesn’t give us any excitement,
We’re too lost in the dark and grey of our ailment.
Not many people understand the disappointments of depression
When the holidays no longer leave quite the happy impression,
And though our Christmas memories are remembered with joy,
This year, while depressed, our hopes and happiness, it does destroy.
And while I want to exclaim to the crisp winter night,
Merry Christmas to all! It just doesn’t feel quite right.

Depression is a very real thing, and it becomes even more real for those of us dealing with it in ourselves and in our loved ones during the holidays because what’s generally thought of as a “happy season” can actually be insurmountably difficult. Depression is an all-consuming monster that sucks out your feelings and leaves you feeling empty, bare, and broken. The holly jolly merriment of the holidays and the stress of gift-giving, end-of-year work preparations, and spending time with family often compound the anxious, unwanted feelings of depression. This leads to higher suicide rates during the holidays than any other time of the year.

If you know someone dealing with real life “Christmas Blues,” be understanding and encouraging. This Christmas won’t feel as merry or bright as ones in the past, but that doesn’t mean that it can’t still be meaningful. Just “being there” for someone you know is dealing with depression or a recent loss of a loved one during the holidays can do so much good. You can make the difference between a horrifically lonely holiday and a fondly remembered if not ideal time.

If you are dealing with depression during the holidays (like myself), then let us first commiserate. I know it’s hard. I know it feels like the Depression Monster is defeating us. If you’re like me and this isn’t your first holiday season while dealing with depression, then you’re probably hoping that it will be different this year but have a sinking feeling in your gut that it isn’t going to be. All I can say is that you have to understand two things. First, that it’s a self-fulfilling prophecy. If you think Christmas is going to be bad—filled with regrets, uncomfortable situations, and traditions “just not feeling like they used to”—then that’s how your holiday is going to turn out. I’ve found that with a little positive thinking, you can at least increase your likelihood of having a better Christmas experience.

Celebrating during the holiday season when you’re dealing with depression isn’t going to be easy, and many times it will feel exactly like it does in the poem. But in the end, the holidays are all about family, friendship, and fellowship. So even though you feel all alone in your depression, there are more than likely people around you who care and want to help. Remember that in this time of year because you’re never alone. The Christmas Blues may come, but you can ward them off with a little Christmas hope.

Curled my hair and said “I’m gonna take a selfie in the good light today!” And Finn said “Nah, that’s my spot! 😝”
A first look into my #2022ImagineJournaling with the first prompt of “word of the year.” I’m usually a little skeptical of prompts like this. How can one word capture my intentions for the whole year? How can I really even commit to one word without knowing what the year will hold? I’ve also always thought a word for the year needed to be ACTIVE and inciting RADICAL CHANGE. But when I was going through some words recently for inspiration I came across “NOURISH” and realized nothing better encapsulated what I actually need this year. Not RADICAL CHANGE but RADICAL LOVE. We beat ourselves down so much trying to squash ourselves into submission of the idea of “New Year, New Me!” and that we need whatever change we see on Instagram/Facebook/TikTok/Twitter/etc. We need that life…we need that body…we need that love…to be truly happy! And even when I’ve recognized the inherent lies in this, I still find myself pushing and molding and aching for what I think other people think I should be doing. (Doesn’t that sound exhausting?)
It’s a new year! Which means time for a new journaling challenge! 📓🥳
2021 Photo Dump No.5
2021 Photo Dump No.4
2021 Photo Dump No.3
2021 Photo Dump No.2
2021 Photo Dump No.1
Last video of the year! So let’s look back at my 2021. I had a lot of aspirations for this year, but it’s been HARD. So what did I accomplish? And what did I learn from it? Check it out with the link in my bio!